Giving hope and opportunity to girls with particular vulnerabilities 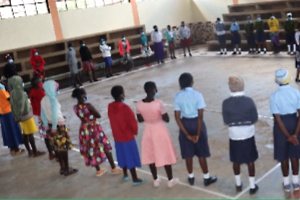 When Naomi was born, his father deserted her and the mother. He reappeared after two years, and they were blessed with a second child who was also born with albinism. This haunted him, and he deserted the family again. For 14 years, he has not come back home. When Naomi’s brother was two years old, the mother ran away, arguing that they did not have any person with albinism in their family. She attributed this to a curse. A Kenya Human Rights Commission study found out that discrimination against people with albinism is usually based on myths. Some Kenyans believe in the myth that the mother of a child with albinism cheated on her husband or that the child with albinism brought a curse on the family. One study found that single mothers raised nearly two-thirds of children with albinism. According to a report by Under the Same Sun, a non-government organization in Kenya, on attacks on persons with albinism (March 23, 2017), there were thirteen reported attacks in Kenya, including five killings and eight survivors.

Naomi and her brother were left under the care of their grandmother, Grace. They lived as squatters on a horticulture farm where they also engaged in casual labour and guarded the farm’s equipment. Grace is hardworking and determined to give her grandchildren a decent life. When Naomi sat for her Kenya Certificate of Primary Education examinations, her chances for progressing to secondary school were dim. Despite education being taunted as the great equalizer, a right and a promise, it was a far-fetched dream for Naomi. Poverty and skin disorder exacerbated her vulnerability. Her grandmother could not afford the school levies and uniform. However, she was compelled by the Government’s 100% secondary school transition policy to enrol her grandchild to form one. A well-wisher who had completed the fourth form in the same school that Naomi was admitted to donated her uniform. The mother managed to mobilize Ksh. 1,000, which she paid as an entry fee. Naomi was enrolled in form one.

https://www.saintmartin-kenya.org/695090b2-07a4-4796-b5db-10aaa046185d" width="230" height="99" />Naomi is one of the 60 girls supported by theSoma Mwana project of St. Martin CSA to improve her learning opportunities and outcomes in the Rumuruti Divison, Laikipia County. The project has provided Naomi with the necessary materials needed to remain in school and a new family of 60 needy and vulnerable girls, motivated to rewrite their history against all odds. In the same group is Beth with Dwarfism, who was deserted by her mother and left under the care of her father, and three girls carrying teenage pregnancies. Ten girls in the project have been forced to live in rental houses to access secondary school education. This increases their exposure to sexual-based violence and vulnerability to early pregnancies, which leads to dropping out of school. The project equips these girls with life skills and empowers them through psychological and education therapies to improve their education outcomes and personal development.

We have launched the Soma Mwana project in partnership with Fondazione Fontana, Italy, to support secondary school education for 500 girls from pastoralist communities. Sixty girls are already benefitting from this initiative.  With Ksh.40 800 (Euros 340) per year, you can support a girl to acquire knowledge, skills and values to live in dignity, build her life, contribute to society and join a chain of young people that are transforming their families and bringing peace to the communities.