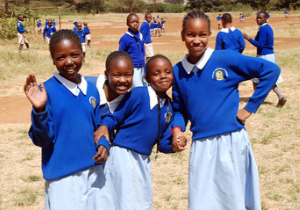 At the age of 12, Helen was to be married off. She comes from an area where this is still a common practice although prohibited by the law. A well-wisher in her community got to know of this and brought her to St. Martin CSA where she was placed in the St. Rose Rescue Home for Girls and received counselling sessions. Some days later, the mother of Helen showed up in the offices of St. Martin and informed the staff of the Community Programme for Children in Need CPCN that she had resolved the case and already returned the dowry to the suiter. As Helen never went to school, St. Martin facilitated her admission in a primary boarding school.

All went well until the holidays came. Helen went home and after two weeks her mother called the suiter again and informed Helen, that she is now married. Helen protested, run out of the house and hid at a neighbour’s place. There she could spend the night but in the morning the neighbour sent her home as he didn’t want to enrage Helen’s mother. So the girl returned home where her mother beat her until she agreed to the marriage.

Because the story was slowly getting known in the community, the suiter decided to move with Helen to the anonymity of Nairobi. So they boarded a vehicle towards Nyahururu.

During the travel, Helen tried to figure out how she could still escape. At one point she noticed that most of the other passengers were from a tribe that did not approve early marriages. So when the bus entered Nyahururu she started yelling that she did not want to be married, that she is still a child and that she wanted to be dropped at St. Martin. The other passengers took notice and instructed the driver to make his first stop in Nyahururu at the police station to hand Helen and her suiter over to the authorities. The suiter got arrested and Helen was transferred once more to St. Martin CSA. Now, Helen is back in school and St. Martin CSA trying to find a solution for the next holidays.

The story of Helen shows well why St. Martin CSA is emphasising so much the awareness-raising about the rights of children – with the parents but also with the children themselves. Helen has proven, that she is capable to demand her rights when she sees them threatened. One way of doing this is by facilitating the formation and operation of children's governments in many schools in the target area of St. Martin. These institutions give the children a voice and help them to spread the knowledge about their rights. For the Day of the African Child 2022, St. Martin CSA is gathering a number of those children's governments to celebrate their work and their achievement. At the same time, charitable children's institutions from Laikipia and Nyandarua county are assembled separately to discuss the current situation of children in their area.