We always appreciate hearing from friends.
If you have any questions or you wish to learn more about our organisation please don’t hesitate to contact us.

You want to contribute ?

Become a Volunteer in St.Martin in which case we expect you to contribute in terms of time and sharing of knowledge and skills.

St. Martin CSA is officially registered as a Trust. Transparency and accountability are highly valued and effected at all levels of the organization.

Pay Bill Numer: 921023
Under account please specify for which programme you want to : "Children in Need", "Addiction and Mental Health", "Peace and reconciliation" or "St. Martin CSA in general".

Please add the details like name of the sender and intention of the donation).

In 1997, a priest in the Nyahururu parish was asked to bless a home in a rural village. While blessing the house with its people, animals and property, the priest bumped into Thomas, a man with mental and physical disabilities who was sitting on the dirty floor behind a door. This unexpected encounter became a turning point with far-reaching implications: How was it possible, the priest asked himself, that he had been requested to bless even the animals but not that very needy human being who seemed to have been neglected and forgotten who was considered insignificant in the house. He wondered if, as Christians, they neglected some of the core duties in society.

In response to these questions, a group of volunteer parishioners was mobilized to start a Community Programme for People with Disabilities. Thomas himself would never benefit from the initiative. He died a few weeks after the meeting with the priest. However, Thomas did not die in vain: He inspired this group of volunteers to dedicate themselves to the people with disabilities in the community.

This was the beginning of St. Martin Catholic Social Apostolate (CSA). The committee of volunteers had no idea what they were getting into. They had to learn about disabilities, how these could be managed and which interventions are appropriate for each case. But first, they had to find out how many people with disabilities were actually present in their parish. And surprisingly, after going to the churches on Sundays and creating awareness among the Christians, hundreds of children with disabilities were identified and registered. For many years these children had been hidden so well that nobody knew about their miserable existence.

The same year, a second group of volunteers was mobilized to look into issues of violence in society. Unfortunately, violence had become a familiar phenomenon, a common response to any arising problem or disagreement. Even the volunteers who went for the first seminars about Active Non-Violence had difficulties believing in alternative ways for solving problems.
But soon after the seminar, they enthusiastically embarked on training sessions themselves to target groups within the communities and spread the methods of Active Non-Violence.

Volunteering was a new concept to the people and in the initial phase much emphasis was given to the spiritual formation of the committees, ”the development of the heart”. As a result, those involved showed great readiness to offer their time and even personal resources for the benefit of the needy.

In the early years, all activities were carried out by volunteers. There were no staff members and resources were very minimal. In the course of 1999 several offices of the former Catholic Dispensary became available and an old Landrover was bought to facilitate transport.

In 1999, there arose a need to formally register the activities of the volunteers as an organization. Saint Martin of Tours was chosen as the patron saint after whom the organization was named. His living example, of being in solidarity with the poor, and his non-violent lifestyle inspired many to follow his example.

A new phase began in the development of St. Martin CSA which focused on organization. It was apparent that there was enormous goodwill among the volunteers, but that there was not enough professionalism to make an impact, The heart had been developed, but the
head had been neglected. During this period, structures, procedures and policies were put in place. Strategic plans were developed through participatory processes and activities were implemented according to clearly spelt out objectives and targets, against which progress could be monitored and evaluated.

Further, two new community committees were constituted to address two other serious problems within the community: the street children in Nyahururu town, who were scavenging the garbage heaps, and the high number of HIV/AIDS-related deaths. A number of food-for-work projects were also undertaken in response to a serious drought in the year 2000.

By the year 2002, a Community Programme for Micro-Credit was established to economically empower the beneficiaries of the organization.

These years saw a rapid expansion of staff numbers. The work, previously done only by volunteers, was now supported by employees. This facilitated the training of more community volunteers and the implementation of activities and tasks, which could not be done by volunteers, such as the running of the street children rehabilitation centres.

After the second phase, during which many programmes were expanded, a period of consolidation commenced, in which the management structures of the organization were strengthened and the St. Martin CSA identity was deepened and made more explicit. This identity increasingly became more important and the need to induct the newly entering staff and volunteers into the values and approach became apparent.

While employing staff during the previous phase, it was feared that the role of community volunteers could be neglected and taken over by the staff. It became necessary to re-emphasize that the volunteers are the heart of the organisation while the staff are merely facilitators.
The volunteers are the people who actually do the work in the community, while the staff enables them to do so. During the St. Martin CSA’s day celebration in November 2003, this concept was brought back into the focus. On that day, having the chart with the organizational structure hanging on the wall behind the speakers, it became clear that the structure portrayed there was far from what was envisioned and after subsequent discussions, the drastic step of putting the organizational structure upside down was taken. The management and directors were not on the top of the chart anymore but the volunteers and facilitators.

The organization was now in a position to formulate its vision and mission which brought about clearly that the focus was on the community; that the organisation's mission was with the ‘able’, the volunteers and other people within the communities, who had talents and gifts, which they could share with the vulnerable. In order to make us not forget our point of focus, the motto “ONLY THROUGH COMMUNITY” was adopted.

Between the years 1999-2002, much emphasis was given to the development of the “head”, to increase professionalism. The following phase would be characterized by efforts to balance the two: the development of “head and heart”. It was realized once again that in the process of giving volunteers technical skills, the importance of building also the heart could not be underestimated. In order to strengthen the capacity of the organization to do so, a spiritual formation team was formed and the so-called ‘”Spirit of St. Martin”, the biblical basis of the organization was recognized.

As the years went by, staff and volunteers worked with the beneficiaries and they realized that in the process of their work, they themselves had been changed. This important realization made us re-evaluate our perception of vulnerable people. While we first saw them as a ‘problem’ that needed to be ‘solved’, we realized that we could also see them as a resource. They had the capacity to make our hearts change and grow in love and solidarity.

With the involvement of many hundreds of volunteers and many supporters in other ways, St. Martin CSA has become more of a movement then a typical organization; a movement of people who believe that communities can transform, if values such as love and solidarity are promoted; not a movement outside the community, but one that is an integral part of the community, one that involves and moves as many people as possible. 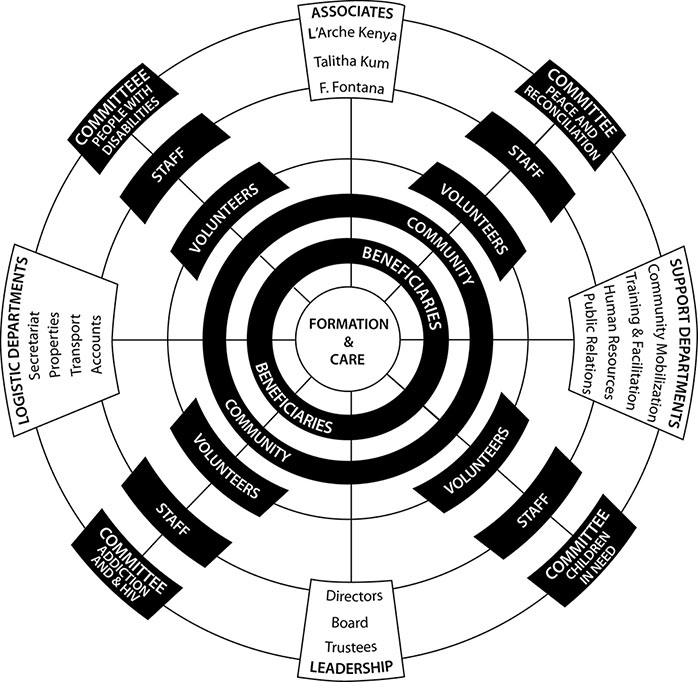 Spiritual and technical formation of all stakeholders is done to enhance the care for, and empowerment of, beneficiaries.

More than receivers of service, they are the ones with the capacity to transform the community.

The community has been bestowed gifts and resources to share with the poor. In the process of sharing, solidarity is built and communities are transformed.

Plan, monitor and evaluate all activities in the programmes and oversee the work of the staff, giving advice and direction

The board, directors and trustees help to keep the organisation true to its vision, mission, approach and spirit

Facilitate the work of the programmes to increase effectiveness and efficiency