This programme started in 1999 and initially concentrated on HIV/AIDS in response to the increasing number of children found in the streets of Nyahurur as an effect of HIV/AIDS. During this period, there was also a lot of stigma about HIV/AIDS and not many families were ready to take in these orphans, most of whom were also HIV positive. The programme provided health and social care to these children and eventually St. Martin CSA was able to start a home for HIV-positive children with Talitha Kumi. In

Until 2008, the alcohol and drugs abuse arm of the programme maintained a low profile only addressing the correlation between alcohol and drugs abuse and HIV/AIDS, but in 2008 the high prevalence of alcohol and drug abuse in the area was recognized and a project for this area was launched. The program and its volunteers are following cases that have been brought to their attention, give first psycho-social support and try to put the beneficiaries on a recovery path.

In mid-2018, the issues of mental health were added to the program. In a pilot project, the abundance and severity of mental health problems were mapped in a defined area and a methodology was developed to bring care and support to the beneficiaries, always following the philosophy and approach of St. Martin CSA to work through the community.

I was losing my marriage because I could not accept the reality of my situation. Despite the fact that I have a job with the government, I could not work on my alcoholism. My wife complained regularly about my inability to provide enough money for the family needs. Occasionally, she took casual jobs in the neighbourhood to earn an extra coin, which embarrassed me.

When she reported the matter to the volunteers I was very angry with her but to my surprise, the volunteers were quite skilled. They helped me to accept my reality and seek help. Then they brought us to the table and reconciled us. I am full of gratitude to them.

St. Martin has developed a Community-based Health Care Model project running from April 2020 through to March 2023; this project aims to their mentally afflicted. For the third time, we are organising a fundraising luncheon in support of this project.

Emerging Trends in Alcohol and Drug Abuse: Challenges and Opportunities

In preparation for the International Day Against Drug Abuse and Illicit Trafficking on 26th June, the Community Programme for Addiction and Mental Health organised a symposium to take stock of the addiction issues in its target area. The event will gather a number of local institutions and personalities who will discuss emerging issues and trends on alcohol and drug abuse, challenges, and possible remedies and or interventions. 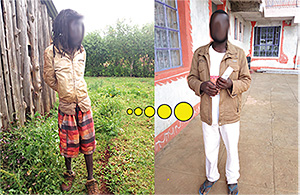